The first section of the new Hwy. 407 in Durham will open next week and drivers can travel on it for free until the end of the year, the Province has announced.

“I am absolutely thrilled to announce that the first phase of Hwy. 407 is now complete and will open officially to traffic on Monday morning,” said Ontario Minister of Transportation Steven Del Duca in Whitby on Friday, June 17.

“Commuters will be able to drive along Hwy. 407 from Brock Road in Pickering to Harmony Road in Oshawa and along Hwy. 412 (in Whitby), which connects the 407 to Hwy. 401. There will be an initial toll-free period for these sections of highway. Drivers will not have to pay toll fees until 2017.”

The Hwy. 407 East project is part of the largest infrastructure investment in Ontario’s history -- about $160 billion over 12 years. It’s intended to help manage congestion, support economic growth and the efficient movement of people and goods through the eastern GTA and beyond.

“The Hwy. 407 East Project will provide significant economic spin-off benefits to the region both now but also for years to come,” said Mr. Del Duca, adding that the improved flow of traffic will also benefit families by shaving time off their daily commutes.

“Highways 407 and 412 will provide alternative options to those commuters and will help people get to and from their destinations faster.” 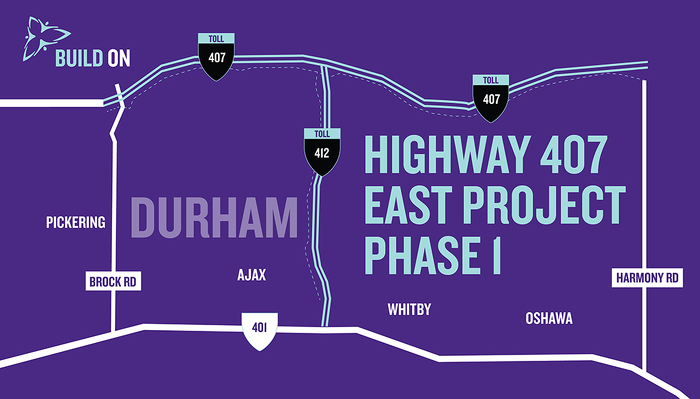 Regional Chairman Roger Anderson said the extension is a welcome addition to Durham, creating a path to major opportunities for local residents, as well as businesses.

“It’s an opportunity for economic development,” he said. “Both sides of the 407 in Durham Region are developable with industrial and commercial development, the Province owns 800 acres of land just east of here, Whitby and Oshawa have lands abutting the 407. It’s a great opportunity for creating jobs for our new residents moving into Durham on a daily basis.”

Whitby Mayor Don Mitchell added that the opening will also bring long-awaited relief to residents affected by road closures, gridlock and other issues related to the ongoing construction.

“Most people are anxious to see it get going. The decision was made a long time ago to run the route here so let’s just get it done, get all the mess out of the way and relieve the congestion, which has been a real serious problem,” he said.

“It’s a serious problem everywhere but Winchester Road has been awful for years so this should fix a lot of that and that will make a lot of people in the area a lot happier.”